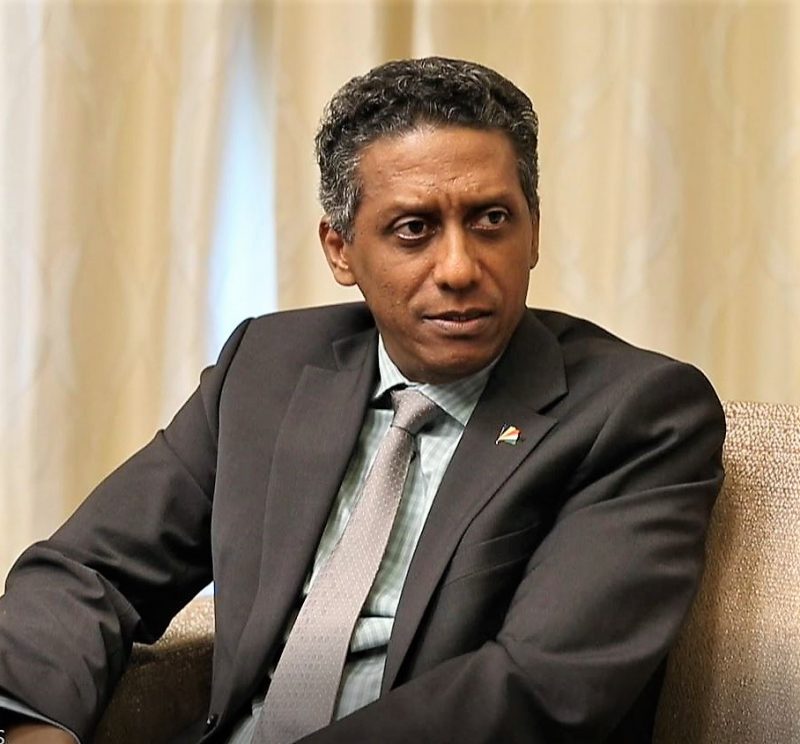 “I am impressed by the UAE’s initiative to establish a university of Artificial Intelligence in Abu Dhabi, which will bring together students from all over the world,” he said in an exclusive interview.

“It is very good that the UAE has taken this initiative because small countries such as Seychelles will benefit from it,” added the president who was in Abu Dhabi this week along with many other world leaders to attend the Abu Dhabi Sustainability Week, ADSW.

Although Seychelles has an institution for science, technology and innovation, the president thinks that it is not practical to emulate the UAE’s initiative in his country.

With an area of 455 square kilometres and a population of around 95,000, Seychelles is a tiny African island nation in the Indian Ocean.

“Given the size of my country with limited human resources, instead of trying it our own [Artificial Intelligence education], I think we rely on a country like the UAE. Our excellent bilateral relationship gives us the opportunity to have a partnership with the UAE to allow our students to benefit from this novel initiative,” he said.

The top students from Seychelles will come and seize this opportunity, he added.

Mohamed bin Zayed University of Artificial Intelligence, MBZUAI, will open for students in September 2020. The university aims to drive excellence in knowledge creation, transfer and use AI to foster economic growth, while positioning Abu Dhabi as a hub for the international AI community.

AI-driven transformation has the potential to generate 133 million new jobs globally, as well as contributing significantly to economies and societal development, according to Dr Sultan Ahmed Al Jaber, UAE Minister of State, and Chair of the MBZUAI Board of Trustees.

Talking about bilateral relations, the President of Seychelles revealed that the UAE pledged support during his visit to build the first rehabilitation centre for drug addicts in Seychelles.

“The UAE is a strong partner. We enjoy excellent relationship between our two states and of course our peoples. The UAE is a natural partner because it believes in the vision we have for our country,” he said.

“Any programme or project we put before the authorities here, the UAE is always supportive.”

The Seychelles’ coastguard is receiving support from the UAE to protect its borders, he revealed. The UAE also invests in real estate, renewable energy and tourism sector in Seychelles.

“The good relationship with the UAE has helped Seychelles to develop similar ties with other Gulf nations,” Faure emphasised.

The 57-year-old politician, who was appointed in 2019 as the African Union Champion on Blue Economy, said, “Most of the African countries now only realised that we have oceans. Their impression was they only had lakes and rivers.”

The works done by Seychelles convinced African leaders around two years ago that the small country could be the best place to become a blue economy, he said.

The blue economy is the sustainable use of ocean resources for economic growth, improved livelihoods and jobs while preserving the health of ocean ecosystem, according to the World Bank.

Seychelles will be presenting the first comprehensive strategy on Blue Economy for the African continent in February, the president explained.

About Africa’s united efforts for prosperity, Faure said, “Our countries have been fighting each other before. We are a young continent. Now only we have a clear vision: Africa 2063. There is an overall consensus to work harder and develop our environment,” he said.

“We spent a lot of money and time on wars. I think the time has come to work for resources, energy and real development that touches people’s lives.”

The president, who attracted global attention for delivering the first live speech from a submersible under the Indian Ocean in April 2019, said it made an impact in terms of raising awareness on ocean conservation. “When we destroy oceans, we destroy humanity, that was the message I wanted to give.”

About Seychelles nationals living and working in the Middle East, the president said they started coming to the region in 1950s, beginning with Lebanon and Bahrain.

Following Bahraini royal family’s visit to Seychelles, some people got jobs in Bahrain and the relationship further strengthened when the royal family bought properties in Seychelles, he said.

He added that the relationship with Lebanon was also excellent but most of Seychelles citizens had to go back home during the Lebanese civil war.